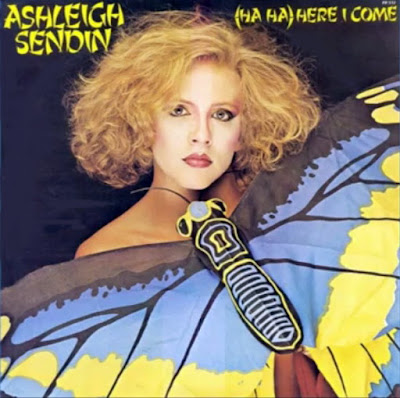 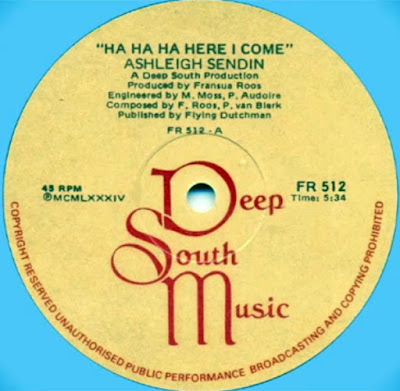 I recently found out that the artist Ashleigh Sendin who sang ‘(Ha Ha) Here I come’ on the South-African compilation album High Energy Double Dance - Vol 2 (1984) and ‘Who needs it’ (Eurobeat 3 - 1987) is a South-African. She has been living in the UK for the past twenty years having had a rewarding career on stage and are currently the headmaster of an Acting school. I contacted her and asked her about her life in South-Africa and UK.

DJ Radcliff: How did you end up recording ‘(Ha Ha) Here I Come’ with the legendary Patric van Blerk and Fransua Roos?
Ashleigh: I met them through a record company called Principal Records for whom I had recorded another single called Rebecca (sort of Kate Bush style ballad).

DJ Radcliff: Was ‘Here I come' released in other markets other than South-Africa?
Ashleigh: To the best of my knowledge none of the tracks were released outside South Africa.

DJ Radcliff: Did you record any other tracks with them during this period?
Ashleigh: I recorded another track which was used on a dance compilation called ‘Who needs it’. They used my name although I recorded it as a session. That was in 1987 just before I left for the UK.

DJ Radcliff: High Energy was really big during this period, even in South-Africa; did you ever get to meet any other High Energy artists?
Ashleigh: When I released ‘Here I come’ I was part of a High Energy dance music concert tour. A group of Dance music recording artists from the US and UK came over for the tour. Evelyn Thomas, Miquel Brown, Marsha Raven, Earlene Bentley and Barbara Pennington.
I worked with Earlene on my first job in the West End, ‘Blues in the Night’ at the Piccadilly Theatre, and then worked with Sinitta a recording artist whose mother is Miquel Brown in ‘HAIR’ at the Old Vic. Small World!

DJ Radcliff: You were also credited in a 1979 movie of South-African director Percival Rubens called Midnight Caller (aka The Demon and The Unholy) How old were you when you appeared in this slasher flick and did you feature in any other films?
Ashleigh: I was 15 in that particular film and was also in a couple of other equally dire South African films one was the ‘Lions Share’ and the other was ‘Follow that Rainbow’.

DJ Radcliff: Would you mind giving us some more information on your life in South-Africa, like what schools you attended, and what local productions you were involved with?
Ashleigh: I grew up in Bryanston and Fourways –when fourways was just veldt. I went to Bryanston Primary and then Bryanston High School. I started professionally at age 13 playing ‘Annie’ for Joan Brickhill and Louis Burke. I did ‘Wizard of OZ’,’ Robin Hood’, ‘Hans Christian Anderson’ and ‘Judy’ for Napac. ‘Godspel’l and ‘My name is Alice’ for Des and Dawn Lindbergh and ‘The Hollow’ and ’The Real Thing’ for Pieter Toerien, among others. For the SABC I did ‘The Settlers’,’ The Danny Bickett Show’,’ Inspector Carr investigates’ and various commercials etc. I was working solidly from the age of 13 so chose not to go the university route.

DJ Radcliff: You have been in the UK for almost 20 years now, do you still have ties with South-Africa and when was the last time you visited our shores?
Ashleigh: My family are all still in SA. I was over only a month ago as my Mum passed away.

DJ Radcliff: Please tell us how you ended up in The West End, what did you do when you first went to the UK?
Ashleigh: I was very lucky in respect of timing when I got to the UK. The West End was experiencing a boom and I was able to get an agent and get work within 6 months of arriving in the UK. My first job was understudying the girl and the woman in ‘Blues in the Night’. I played the Juve lead in ‘Anything Goes’ with Elaine Paige. On ‘Saturday Night’ I achieved a lifelong ambition which was to meet Stephen Sondheim.

DJ Radcliff: As mentioned before you were involved in many musicals on the West End, give us a brief list of you proudest achievements?
Ashleigh: Some I have already mentioned but will give a brief list. ‘Blues in the Night’ at the Piccadilly theatre, ‘Anything Goes’ at the Prince Edward theatre, ‘Lady in the Dark’ at The National, ‘Hair’ at the Old Vic. ‘Promises, Promises’ and Sondheim’s ’Saturday Night’, The obligatory pantomimes if living in the UK, ‘Cinderella’ and ‘Aladdin’. Several seasons of ‘Lost’ musicals at the Barbican-Concert Productions of musicals from the 30’s to the 50’s mainly. I performed in seven of those over five seasons. Several concept albums for projected musicals which I still do occasionally and session work i.e. backing vocals for demos also for ITV’S Spitting Image. I performed with the cast of ‘Anything Goes’ for The Queen Mothers 90th Birthday at the London Palladium as well as several Charity performances for Crusade and the Princess Diana Fund also at the Palladium.

DJ Radcliff: You are currently the principal of a company called ‘Stagecoach’ What exactly is ‘Stagecoach’ and what other projects are you currently working on?
Ashleigh: Stagecoach is a large organization with Theatre schools all over the UK and the World. I bought the franchise for Penzance so own the business for that territory. Basically I am the principal and I employ 4 teachers and an assistant. It’s pretty much what I do full time. I got tired of doing 8 shows a week I had been working in Musicals for 25 years!


DJ Radcliff: Thank you for chatting to us; it was really interesting to find out what Asleigh Sendin has been up to the past 24 years since High Energy Double Dance Vol 2 came out. Keep well! 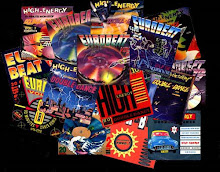